Join us for a special evening with one of the world’s foremost contemporary calligraphy artists Tashi Mannox. Tashi is not only a master of various Tibetan traditional scripts, but has innovated his technique and concept to develop his own unique artistic style while remaining rooted to the integrity of tradition. Having trained and studied with the great teachers of Tibetan calligraphy as a young monk himself, Tashi furthered his knowledge of Tibetan script, decoration, and design by traveling through India, Nepal and Tibet. He has exhibited around the world, and his new book Sacred Scripts: A Meditative Journey Through Tibetan Calligraphy has just been published by Mandala Publishing. Tashi will talk about his life’s journey and will give a demonstration of his beautiful calligraphy artistry. 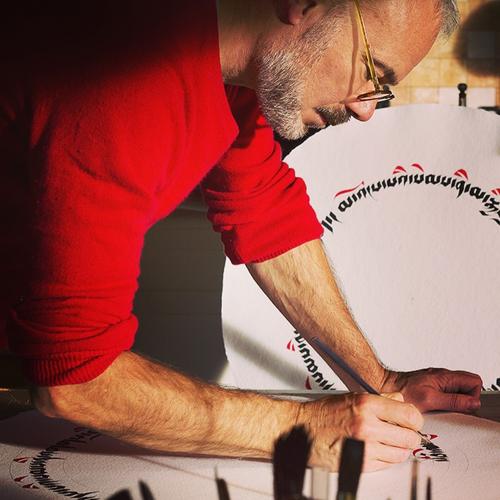 Tashi Mannox’s name embodies both the Eastern and Western artistic disciplines in his thirty-five-year journey as a painter and calligrapher. Born British to the family name Mannox, he received the first name Tashi when he became a Buddhist monk of the Tibetan Kagyu order at the age of twenty-two, shortly after earning a BA [Hons] degree in Fine Art.

For the next seventeen years as a monk, he apprenticed under the direction of a master of Tibetan art, the late Sherab Palden Beru. Part of Tashi’s training was in the elaborate art of temple decoration, which is traditionally a hub for Tibetan art and its deep symbolism. During his years in the monastery, Tashientered a four-year Buddhist retreat, where he worked as a scribe, meticulously copying ancient Tibetan manuscripts. This highly disciplined training laid a firm foundation for his proficiency in the multiple forms of Tibetan calligraphy.

Since laying down his monastic robes in 2000, Tashi has built on his disciplined training and arising spiritual awareness to produce collections of iconographic masterpieces that reveal powerful, sacred themes through the majestic images of Tibetan Buddhist iconography. He is now recognized as one of the world’s foremost contemporary Tibetan calligraphy artists, exhibiting internationally in London, Moscow, New York, Los Angeles, Sharjah, and with up-and-coming exhibitions in Bhutan and Brazil.

In recent years, Tashi has held numerous workshops, courses, and retreats worldwide, instructing in the art of Tibetan calligraphy and Dharma art with its all-important meditative approach to all creativity.